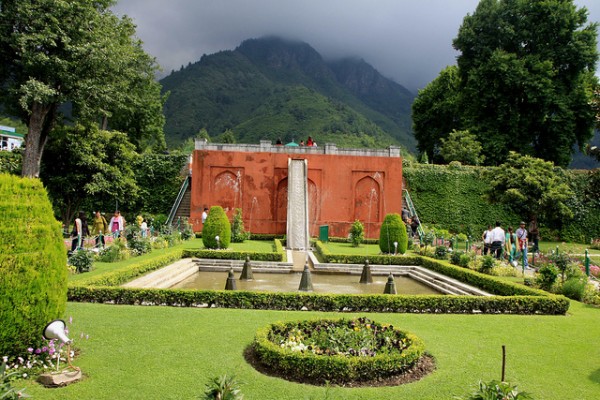 Terraced lawns, cascading fountains, paint-box bright flower beds with the panorama of the Dal Lake in front of them. The three Mughal Gardens of Cheshmashahi, Nishat and Shalimar are the Mughal emperor’s concept of paradise and are today very popular places for picnics. These gardens are traditionally patterned in the formal gardens of Central Asia, Persia and Turkistan.

Chesmashahi: Cheshmashahi is the first Mughal Garden you will pass after Nehru Park. Built at a height above the city , its views are as stupendous as its layout. The smallest of Srinagar’s Mughal gardens, Cheshmashahi has only three terraces in addition to a natural spring of water enclosed in a stone pavilion.

Nishat, built by Empress Nur Jahan’s brother Asaf Khan. The largest of the gardens, Nishat has seven terraces. These terraces rise dramatically off the maountains from the eastern part of the lake, and these together with the flower-beds, a riot of brilliant colors, present an unforgettable sight.

Shalimar, the garden of love, was built by Emperor Jahangir, whose love for the Kashmir was legendary. Shaded by magnificient chinar trees, the Shalimar is a series of stones of pavilions and flowerbeds.

Pari Mahal, Initially a garden built by Dara Shikoh for his sufi teacher, Mulla Shah, and decorated with several springs that have dried up, the Pari Mahal gardens are now proudly maintained by the state government. Built around a small spring, they house exotic flowering plants laid out in terraces surmounted by the ruined arches of a once beautiful building. Pari Mahal is illuminated at night, and can be seen, located on the on the spur of a hill, most places in Srinagar.